Affected environments: US-1 Preview, US-1 Production

On Wednesday, October 12, Auth0 experienced an outage of our US authentication services. As a result of this outage, our subscribers experienced 57 minutes of downtime of services along with an additional 0.0007% of traffic dropped as we worked to restore services over 5 hours and 23 minutes. I would like to apologize to our subscribers for the impact to their daily operations as a result of this outage. Unplanned downtime of any length is unacceptable to us. In this case we fell short of both our customers’ expectations and our own. For that, I am truly sorry.

I would like to take a moment and explain what caused the outage, the resulting response from our team, and what we are doing to prevent events like this in the future.

In our current US database architecture design, we leverage three different data centers to provide multiple levels of redundancy in the event of failure (illustrated below). 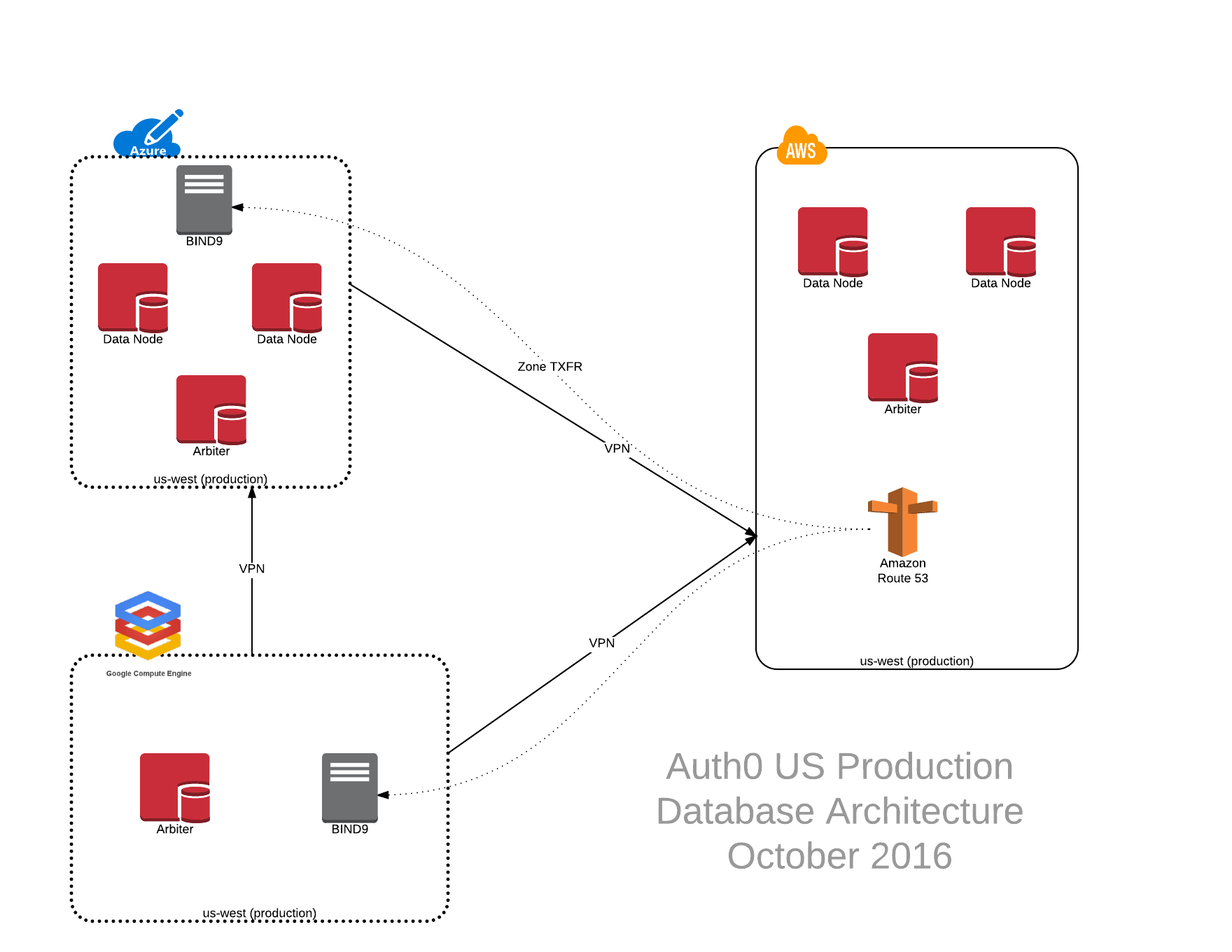 This design currently utilizes two data nodes and a single arbiter node at both our primary datacenter (AWS) and our secondary datacenter (Azure). In order to maintain data resiliency, our database technology (MongoDB) uses elections to determine which data node will be the primary database node (the only node in the cluster that can accept writes) and which nodes will be secondary nodes. There is also a third type of node role that we leverage called an arbiter. This node is able to participate in voting elections, however it does not store any data.

In the event that the primary database server has a failure and is unable to properly serve data, the cluster will initiate an election in order to vote and promote one of the existing secondary nodes to be a primary data node. The design includes the independent arbiter installation in our Google Datacenter (GCE). In the event of a network partition, the arbiter located in GCE is designed to monitor both AWS and Azure datacenters for failure. This design is intended to break any ties between the two datacenters, and thereby avoiding a split-brain scenario in the cluster. We have also weighted priorities on each node, preferring AWS before Azure to minimize latency.

DNS for this solution is hosted in a private zone provided by AWS Route 53. In order to avoid a dependency on DNS, the zone data is replicated at each datacenter in the event that VPN links are abruptly terminated. To facilitate this, a job runs every few minutes in both the Azure and GCE data centers to refresh the DNS zone data and make it available to local BIND9 nodes for serving.

On October 12 at 05:19 UTC, our VPN endpoint in AWS suffered from memory exhaustion, and momentarily dropped incoming IPSEC packets from our Azure and GCE sites. This condition cleared within a second, and the connection was re-established automatically via configured keepalive setting.

Our response team arrived at 05:21 UTC and found all members of the database cluster in a SECONDARY state and began troubleshooting. Over the next several minutes, the team was unsuccessful in forcing promotion of a data node in either the AWS or Azure data centers. The GCE database arbiter was actively vetoing the promotion of AWS data nodes to primary, and arbiters in AWS were actively blocking the promotion of Azure nodes to primary. The database nodes in AWS were temporarily taken offline to prevent veto voting from occurring, and was sufficient to force the election of the primary database server in Azure. This was completed at 06:12 UTC. At this time, authentication services in Azure began responding to requests and error conditions began subsiding.

Once the service state returned to a working state, the team once again attempted to move the primary database role back to AWS from Azure. This again triggered the veto loop and services again were dropped for approximately two minutes while the team recovered the database in the same fashion previously. Over the course of the next few hours, the response team continued to attempt to roll back traffic to the primary data center in AWS. Each election event would result in the arbiter node in the Google data center again actively vetoing attempts to promote nodes in the AWS datacenter.

After further discovery, the response team found that the arbiter node in the Google data center was unable to connect to any of the database nodes in the AWS data center, and as a result considered those nodes UNHEALTHY. This resulted in the arbiter issuing vetoes anytime an AWS node was elected as it could not independently verify their health. The response team found that DNS requests for the IP addresses of the database servers in AWS were going unanswered. Upon further investigation, the response team found that the BIND9 DNS server actively refused to load up the internal zone data due to an incorrectly formatted DNS record. Once the team removed the offending record from the zone, the DNS server successfully loaded the internal DNS zone and was able to properly resolve the address for the database servers in AWS. This was completed at 11:35 UTC. Shortly afterward, the response team was able to successfully elect one of the database nodes in AWS without a veto from the Google arbiter, and transparently moved traffic back from Azure to AWS where it continues to run.

What we’re doing about it…

This problem uncovered quite a bit about our infrastructure that we have been critically reviewing over the last 36 hours. We will be aggressively implementing the following remediation over the coming weeks:

We realize that Auth0 is a critical part of your development and production infrastructure. Again, I would like to take a moment to apologize for the impact that this outage had on your operations. We are deeply aware of the pains that you and your subscribers feel as a result of downtime. Issues like the one described above only harden our resolve to provide you with the most safe and stable way to authenticate, and to respect the trust you have placed with us. Our teams continue to work tirelessly to provide you with the best authentication experience possible.

Thank you for your continued support of Auth0.

History for this incident

All systems have returned to normal operations. Team will be publishing a post-mortem after full review is completed.

Incident team has identified the root cause of the issue. Database cluster has been repaired, and is currently synchronizing replication traffic. Response times are starting to return to normal. Team continues to monitor the situation.

Response team is trying to switch back to main database cluster but still getting errors.

Response team has addressed the issue. Performance and logs should be coming up. We will continue monitoring.

We are running in failover mode. Response times are expected to be high. Response team is working to resolve the issue. Guardian (MFA) is now available.

We are seeing elevated error rates. Response team has been notified and it's looking.